We are dedicated, proactive and innovative but, most of all, we are exceptionally nice people to work with. At Bubble, every single member of the team is an experienced PR and communications professional who has experience in the media and entertainment sector. 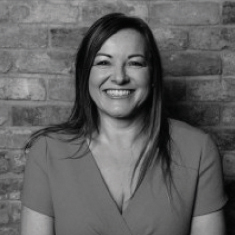 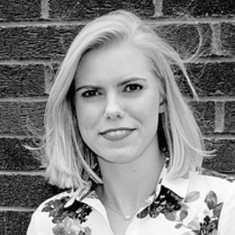 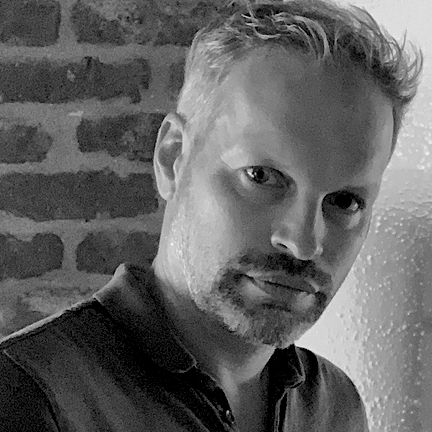 Sadie founded Bubble in 1999 and is still very much the driving force. Using her 20 odd years of PR and Marketing experience she not only works with clients on their strategy, messaging and campaigns but also promotes the role of women in the industries she works in through RISE and WAVE. A keen traveller, she is trying to go to 50 countries before she is 50 and would like to spend more time on the golf course. 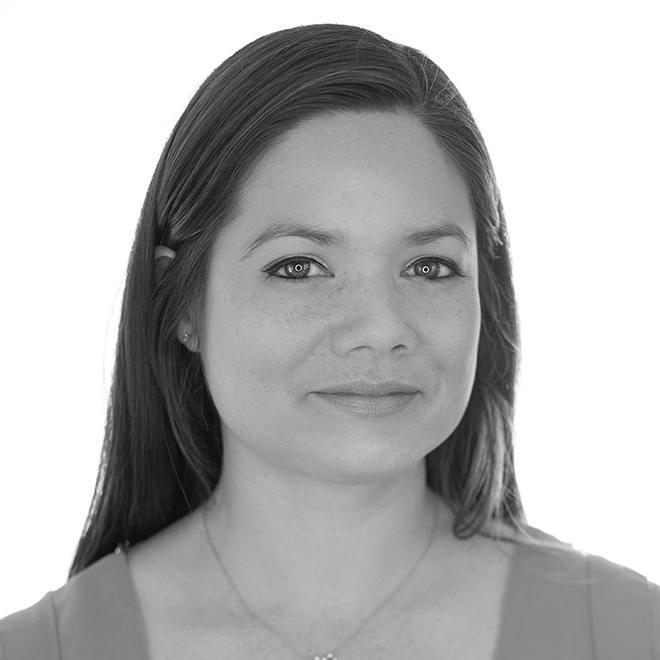 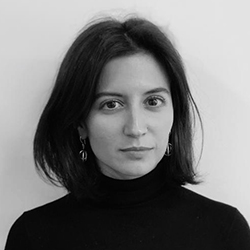 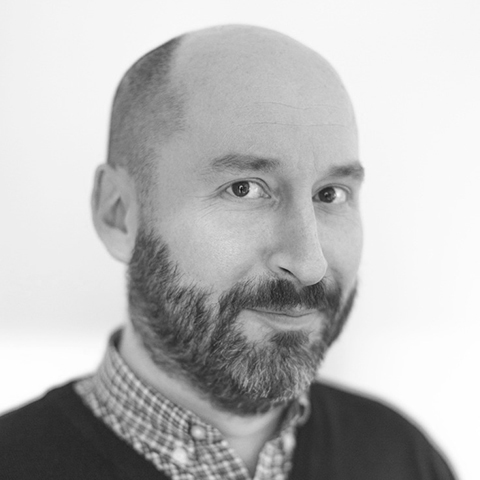 Laura is a PR and Communications specialist with over 8 years’ experience in the Entertainment PR industry. Throughout her career she has been designing and implementing 360° PR campaigns across a wide range of markets.

Her client experience includes Netflix, Disney, Mattel, Activision, Proactiv, Friends of Glass, Telefonica, amongst others, specialising in product and brand launches as well as in brand awareness campaigns.

Laura is a results-oriented professional with strong leadership skills who has landed at Bubble with an appetite to continue building the team and contributing with out-of-the-box ideas and award-winning campaign strategies. She is fluent in Spanish and French.

Rufus is an ex-journalist and PR professional with over twenty years of experience in B2B technology and telecoms. As a journalist, he started out covering the water industry, then telecoms for Global Mobile Daily and Global Mobile. He was also the Technology Reporter at leading title Marketing Week.

Rufus made the move into agency PR back in 2009. Since then, he has used his industry knowledge and journalistic experience to provide strategic PR counsel, develop effective PR strategies and lead accounts for a host of clients including Canon, Toshiba, Microsoft, Trend Micro and Websense, among others. 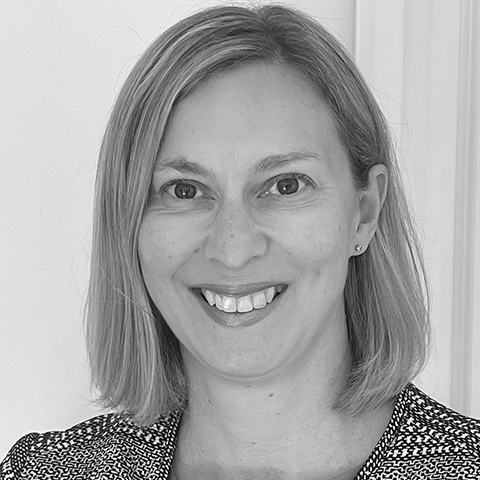 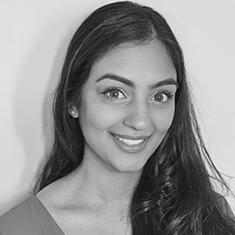 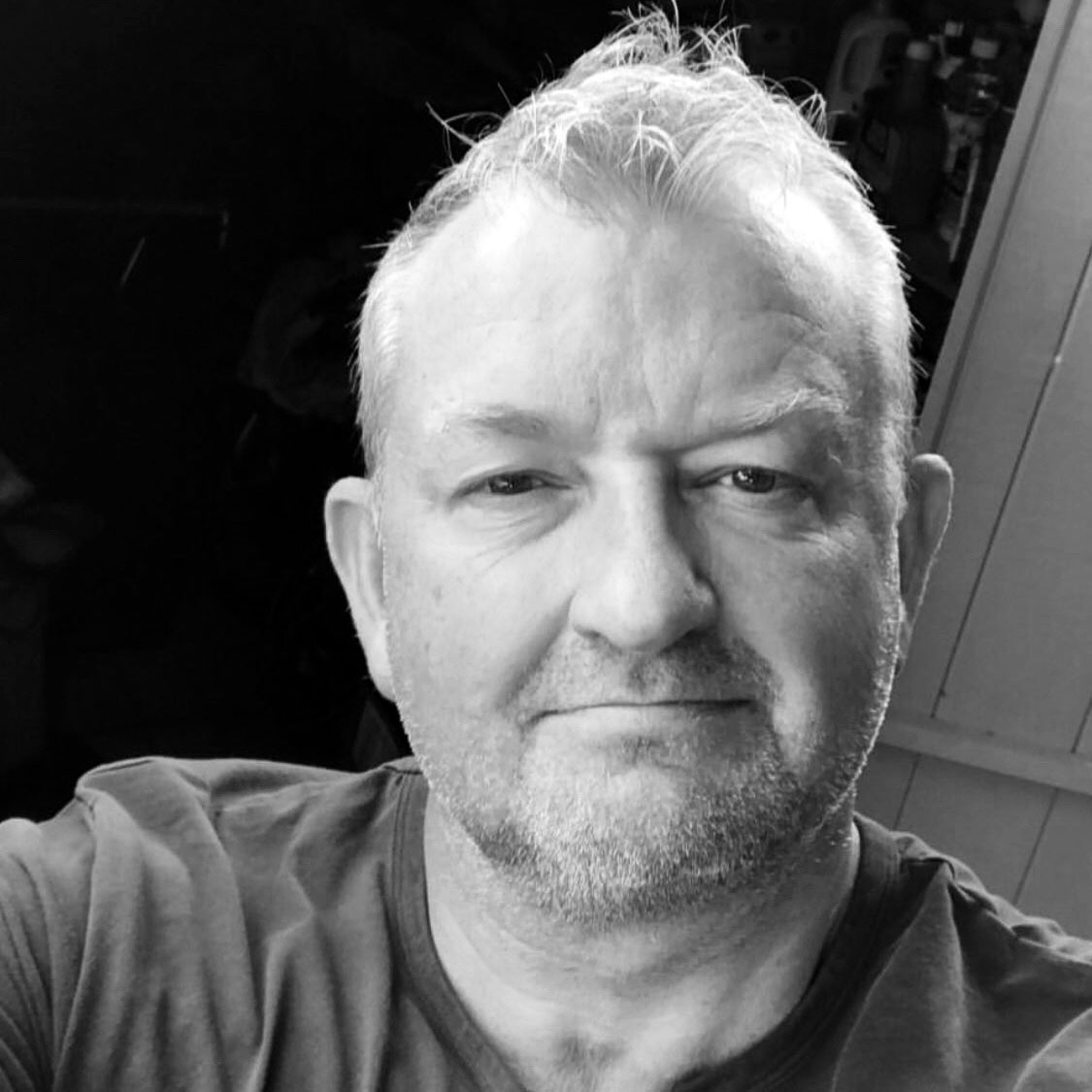 Lesley is a multi-skilled communications professional with over 20 years of experience in the B2B technology, publishing, corporate and consumer sectors. Throughout her career, which spans markets that include South Africa and the UK, Lesley has conceptualised and shaped PR and content marketing campaigns to engage audiences and deliver meaningful results for clients.

She brings a wealth of industry knowledge, PR and content marketing experience to Bubble, with client experience that includes Isotrak, Verilocation, Cloudian, Ergotron, Premier FMCG and Distell, among others.

Heading up Bubble Agency’s tailored ‘No Headcount Required’ marketing service, Nikita is a Chartered Marketer with a Bachelor’s and a Master’s degree in Marketing. With over 10 years’ experience in all facets of marketing, she is a proficient marketing strategist, analyst and planner who has run omni-channel campaigns both nationally and internationally. She firmly believes in the power of inbound marketing and brings a wealth of skills to Bubble including expertise in HubSpot, marketing automation, martech, marcomms and much more.

Andrew has over 20 years’ B2B marketing and account management experience with a focus on lead generation and sales.

Having started his sales and marketing career in regional and national press, he then moved to his first global agency. His client experience includes Rolls Royce, Aston Martin, Marketing Agencies Association and Magic Light, the team behind The Gruffalo and The Stick Man.

Andrew’s extensive knowledge and contacts in media, advertising and TV production make him a great addition to the Bubble team. 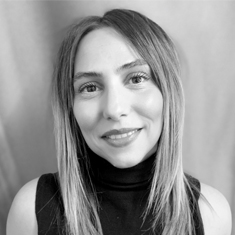 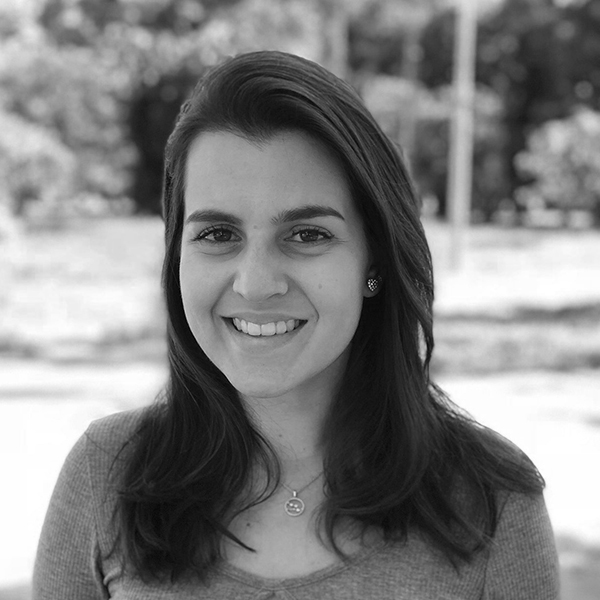 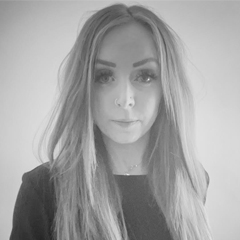 Having spent 10 years at IBC, the world’s most influential media show, Kelli was Head of Exhibitions for three years, and Head of Events for the past three years. Prior to that she held various senior event operations positions at organisations including Informa Telecoms and Media.

She has worked with many clients throughout her career giving her extensive experience proving strong leadership and the ability to successfully manage relationships, as well as produce high customer satisfaction rates. Kelli (and her laugh) is well-known in the industry and she brings with her a wealth of experience, passion and enthusiasm to Bubble.

Aline has over 6 years’ experience working in the B2B Technology PR industry. Throughout her career she has been designing and implementing 360° PR campaigns across a wide range of markets, including the UK and Brazil.

Her client experience includes Workday, Cloudera, Silicon Valley Bank, Ericsson, Liberty Mutual, Logitech, Adyen, amongst others. She brings to Bubble her expertise in PR and content marketing and her passion for tech, broadcast and media.

Aline speaks native English and Portuguese, as well as a bit of Spanish, German and French.

Laura joins the Bubble team as she completes an MA in PR and multimedia communications at Solent University. She has a first class degree in English Literature from Portsmouth University and a great deal of experience in business development and operations. Laura is looking forward to applying the skills developed from her MA, along with her enthusiasm and passion for PR, to her role within Bubble. Laura has a particular interest in organisational authenticity and the ways in which businesses can develop their communications to demonstrate transparency and build authentic relationships with stakeholders and publics. 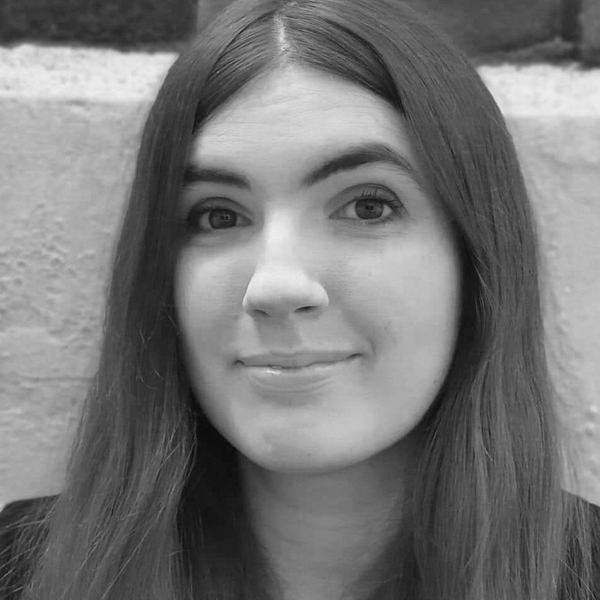 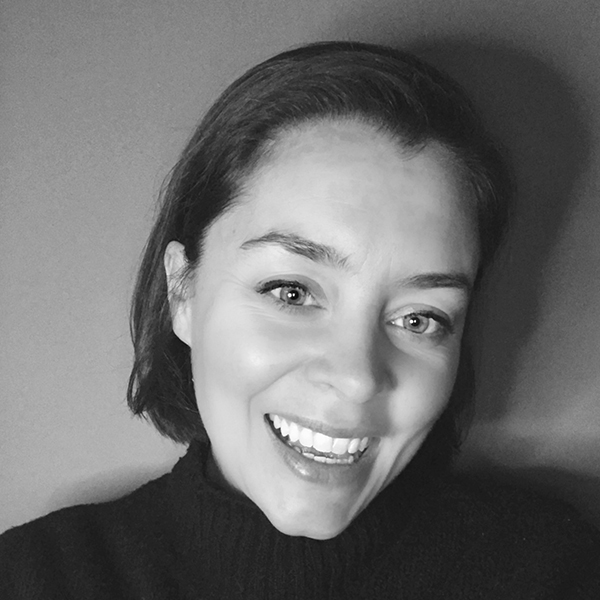 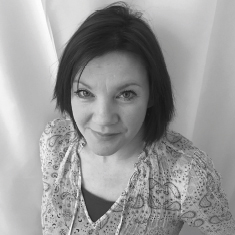 Emma is an HR and business operations professional with nearly 20 years’ experience managing a wide range of projects, across a variety of industries and business life-cycle stages. As an occupational psychologist and project manager, she is not only driven by results, but also a passion for understanding people and working to align well-being and success.

Emma joins the Bubble team part way through her Public Relations and Multimedia Communications Masters. She has a First in English and Media from Solent University and is looking forward to bringing the drive and creativity from her freelance experience to her work at Bubble. Emma is passionate about the planet and sustainability and enjoys trying out new Vegan recipes and tabletop gaming in her spare time. 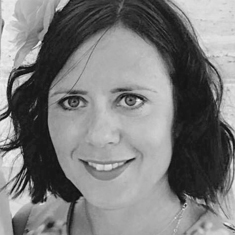 Melanie is an experienced PR consultant with 13 years under her belt in the industry, and specialises in TV and media. She started her career in TV production where she spent seven years at companies including RDF Media, Endemol Shine and Leopard Films (now Argonon), before moving into PR. 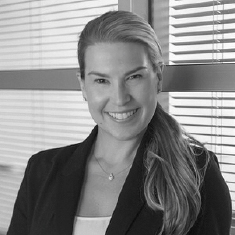 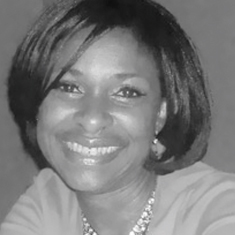 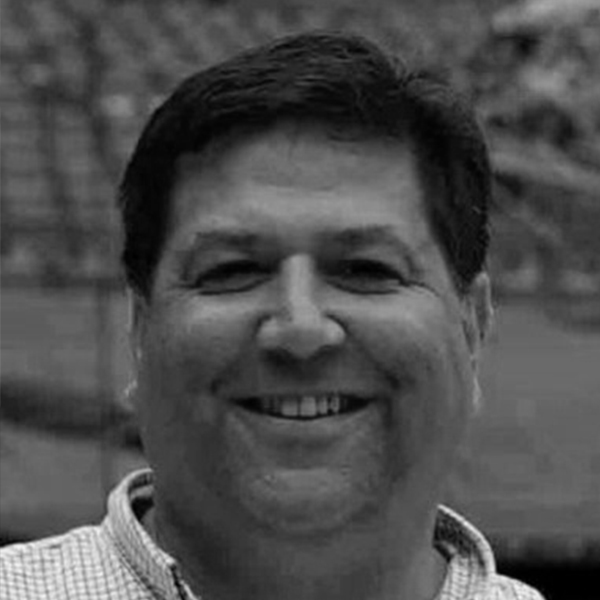 Denise has been an industry professional for more than 20 years, with expertise in the broadcast, entertainment and media industries, as well as the ProAV sector. She well connected with journalist and analyst across the industry and is skilled at developing and fine-tuning regional PR approaches for successful global programs. Based in Portland, Oregon, Denise has a strong work ethic and portrays a deep commitment to her profession.

Season Skuro is a senior level public relations and corporate communications executive with 20 years’ experience in the technology, entertainment, corporate and consumer product sectors. Previously, she spent 10 years at Technicolor managing the international corporate communications activities for the company. Based in Los Angeles, Season has worked with many clients throughout her career including Sony PlayStation, Nortel Networks, Yahoo!, Earthbound Farms, Ritz-Carlton and many more. 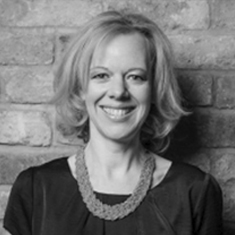 Having begun her career in the broadcast industry back in 1996, Wendy has since honed her marketing and PR skills at Avid, post-production facility Resolution and, of course, Bubble Agency. Wendy is our lead writer across several key accounts and resident copy editor/QC and is based in Dubai.

Want to join us?

The Bubble team is expanding and we’re currently looking for a host of roles. If you’re interested in working in a no-nonsense boutique communications agency, with global offices and clients

The Bubble team have been fantastic and the quality of the work is always exceptional – even at short notice. Our work with Bubble has produced some of the best coverage we have ever had!

Working with Bubble has been integral to a rapid improvement in the delivery of our PR and communication strategy. The entire Bubble team are always friendly and professional as well as knowledgeable and well-connected. A real joy to work with!

Bubble are a great bunch to have on your team. The whole staff combine high degrees of professionalism and diligence with an impressive depth of industry knowledge and reach, all delivered with huge fun and energy.

Since working with Bubble, we have been able to target key industries and sectors in a much more strategic way, which has been instrumental the growth of our business. Bubble is an invaluable part of our team and is really helping us to drive our business presence forward both through PR and at trade shows.

Bubble Agency has worked with The Media Production Show for the last few years to provide exhibitor PR to clients and show PR to the wider industry press. We have always been impressed with their professionalism, the ability to tun around requests quickly and run our PR Lounge to a high standard during the show.

Bubble Agency is made up of hardworking, passionate and caring professionals. They have great knowledge of the PR world, true specialists in the broadcast and video industry and they always have great ideas to increase our exposure.

One thing that really sets them apart is the depth of their relationships with the editors and the community that serves our space.

They're a nice, easy, straightforward, honest company to deal with.

As Signiant’s core market is M&E, Bubble has proven to be the perfect agency for us. They understand our market and are well-connected with the key influencers, publications and events in the industry. Day-to-day they are always on top of every detail and are a joy to work with. They are, after all, Bubbles.

The Bubbles are highly knowledgeable, reliable and have become an integral part of our team. Their winning combination of industry passion and communications expertise has generated a significant increase in our media presence, both in print and online.